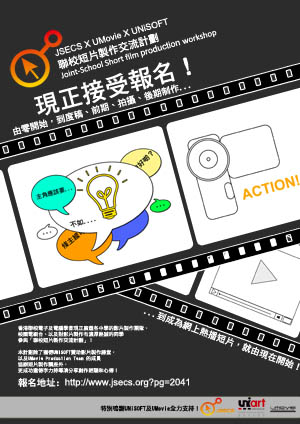 This year is the 30th anniversary of HKJSECS. To celebrate this milestone year, we would like to look back and see how IT has reformed our lives in the past 30 years.

In recent years, short-film is a popular way to publish different information. Video sharing websites such as YouTube, Yahoo! Videos and Google Videos have become platforms for everyone to bring their creativity into full play. Furthermore, more and more schools have established a campus TV team for providing a new path for promoting school events. This is a phenomenon which we could hardly imagine 30 years before.

Through a rewind of IT history, HKJSECS hopes that student would unleash their creativity to witness the change of the e-world and develop a great vision on its future. Moreover, the HKJSECS would like to create an opportunity for the campus TV teams of different schools to share their experience. We would like to invite all students who are interested in this field to join this meaningful workshop.

Any full-time secondary school students are eligible.
Applicants should fill in the application form available on the HKJSECS website.

Films will be judged by the judging panel of the contest, which consists of professors of universities and experts in IT. Judging will be based on the creativity and accuracy of the films.

Judgement will be based on the creativity and accuracy of the films.
Entries will be judged by a judging panel consisting of:

Timetable for the workshop